Fountain of Vaucluse,clic on the picture to see Gallery Photos

The exceptional site of "Vallis clausa", the Vallée close, the bottom of which mysteriously appeared Sorgue, gave the village its name from the tenth century Fontaine de Vaucluse is one of the most visited in Provence thanks to that source which springs at the foot of a 230m high cliff at the bottom of the clause valley.

It is the most powerful in France with an annual water flow of 630 million cubic meters. The waterfall with white water scum become emerald green in summer the waterfall disappears under the rocks and the rivers underground spring is a little lower in the valley, the waterfall roars during floods Autonne, winter and spring: 90 m3 per second flow into the bed of the Sorgue.

Fontaine de Vaucluse gave its name to the department "Vallis Clausa": Vallée Close: Vaucluse. Many artists as Frédéric Mistral, Petrarch and René Char found inspiration in its magical places .The gap that feeds the Cascade retains all are Mystery malgrés any spéléogiques the expeditions that have taken place since the end of the nineteenth century into the abyss shaped vertical funnel 308 meters deep and over a century of exploration.

Ruins of the castle of the Bishops of Cavaillon, ND fourteenth Church of St Veran Romanesque style of the XI Ruins of a Roman canal on the Sorgue.Musée Santon 'Museum Résistance.Musée The Underworld cave. Petrarch Museum (in the former home of Italian poet fourteenth) .Moulin paper (papermaking by hand as in the fifteenth) 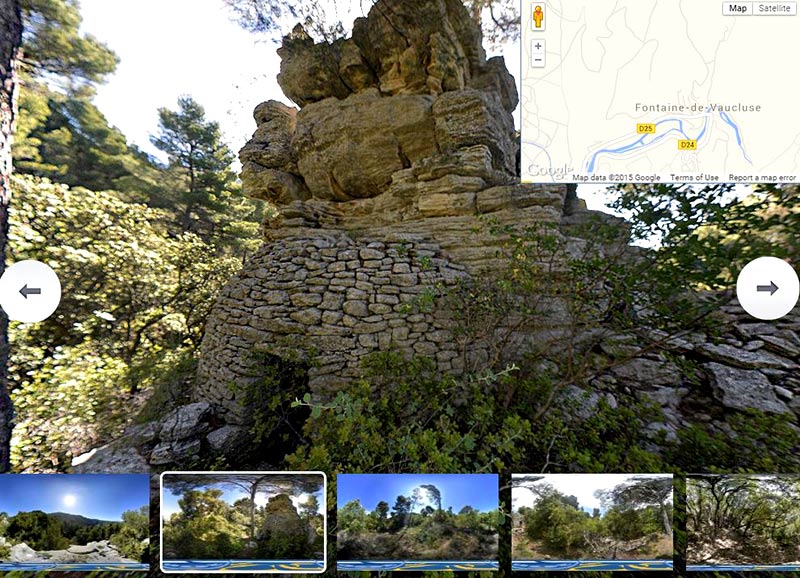